A Potpourri of Nothingness

As a treat tonight, it will be mostly pictures, fewer words. There's no question that I was wordy last night ;-) First up: Icicles. Pretty, but.... 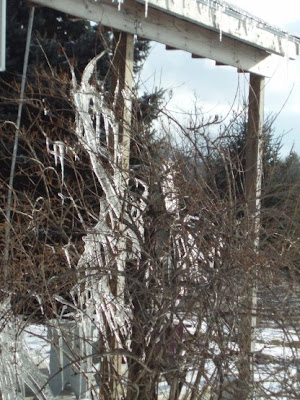 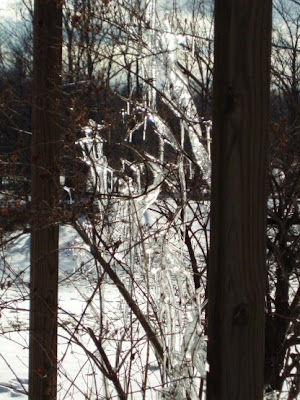 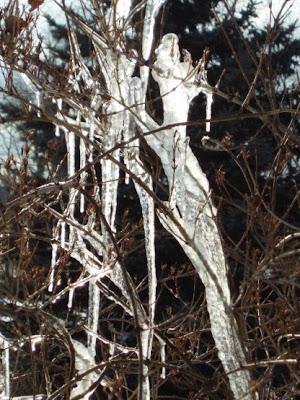 The hint for the mystery quilt--see, I am quilting on it! (Picture not to scale!) 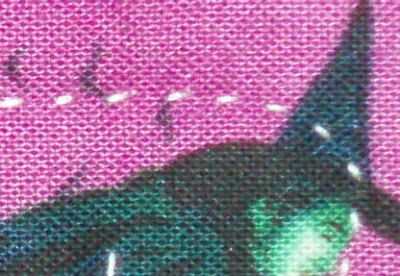 New book, hot off the press: Organizing Solutions for Every Quilter by Carolyn Woods (C&T Publishing). It is fabulous! Great ideas and a bargain at $19.95.
To listen to: Plum Pudding Murder by Joanne Fluke. That's it for tonight!

The Fickle Finger of Fate

For the past several days I had been preparing for a lecture/demo on quilt labeling. Monday morning I finished packing and got ready to leave for an evening event in New Hartford, about 100 miles from home. I left in plenty of time to get there for dinner at 5 pm. I was actually a bit early so I decided to stop for gas before continuing to the restaurant. I prepaid, pumped my gas, and got back in the car. Turned the key and...nothing happened!!! I tried several more times, to no avail. I pulled out my cell phone to call my brother (he's very mechanical and good at diagnosing problems over the phone) and opened the hood. He thought it might be a loose connector to the battery--but I wiggled both and they were solid. Then he told me to find someone stronger to see if they really wouldn't move! So I asked this nice gentleman at the pump next to me if he could help me when he finished pumping his gas. He graciously agreed...and they didn't wiggle for him either!!! Another young man came over to see if he could help. He actually got under the car with a wrench to bang on the starter to see if it was frozen. The unfortunate story was that it wasn't frozen...the starter just plain quit!

One of the men went into the gas station and told them I was having problems so that they wouldn't wonder why I was still at the pump. Both wished me luck.
The good news? I was within 5 miles of my destination! And I had Nancy's cell phone number. So I gave her a call and explained the situation. I do have AAA but they will only tow the car once for the same problem. And I still needed to get home! Nancy came and picked me and my bags up at the gas station and drove me to the meeting place. The ladies in the gas station said to lock up the car and they would keep an eye on it, even after I explained that I would be gone several hours and there was no way I could move the car for that length of time. The kindness of strangers certainly ruled last night!
The presentation was well-attended (some thought it was the biggest turnout for a speaker ever!) and the ladies did an excellent job of practicing some simple techniques and then making a final project. It's so exciting to see someone learn that they CAN do something artistic!

Repacked the bags, loaded Nancy's car and off we went, with Claudia, back to the gas station. I must admit to being a bit apprehensive as we neared the station--what if they had had my car towed after I left?????? But it was still there! Nancy and Claudia helped me transfer stuff back into my car and refused to leave until I had made all the arrangements with AAA to get back home. Both were truly guardian angels and I cannot express how much this meant to me.

Shifts had changed and now a very nice young man was behind the counter. I explained who I was and he couldn't have been nicer. The tow truck came in record time. The driver humored me (with no smirking) when I asked him if we could try jumping the car before we committed to towing. No joy, but he did it cheerfully and willingly. And then pulled my poor car up onto the rollback.
So my day ended by being driven all 89 miles home! I got home about 12:45 am--and was never so glad to see home!

So guess what? I am still a lucky, lucky girl. The fact that I was so close to where I needed to be before breaking down. The fact that two young women and one young man at the gas station were so kind and accommodating was unexpected and appreciated at a time when I really needed it. A tow truck driver who didn't treat me like a nincompoop for asking to try something that, if it had worked, would have saved the tow. And the pleasure of being home in my own bed at the end of that day. A giant THANK YOU to all who were so helpful. Your kindness meant more than you can ever know.

Okay, now to some housekeeping chores:

First, the 300th blog patterns are going in the mail Wednesday! I think they are worth the wait. Special thanks to Karen M. who made great suggestions to an early version and the patterns are much better for it! Sue and Laurie in Maine--I still need your snail mail addresses or an email saying you are really not interested.

Second, before I started this post, I checked the Missing Quilts site to see if Janet's quilt had been found. Unfortunately, it is still among the missing. I can't tell you how sorry I am that this happened to Janet--and to all those quilters who are also missing their quilts.

What I'm reading? Strategic Moves by Stuart Woods (on CD) and The Happiness Project by Gretchen Rubin (a real book). I can't remember if I told you about Even Money and Crossfire, both by Dick and Felix Francis--excellent!

Enough for now. Pictures will return next post, complete with a new hint on the surprise quilt!

Each year several hundred quilts go missing. For most of us, they are horror stories that concern us, but don't touch us personally. This one hit close to home.

Late last year, Janet Atkins shared a photo of her quilt "Kaaterskill". She had started it in a workshop with both Anita Shackelford and me. She literally took those mariner's compass blocks and made a quilt uniquely her own. Hand pieced, hand appliqued and hand quilted over a four year period. 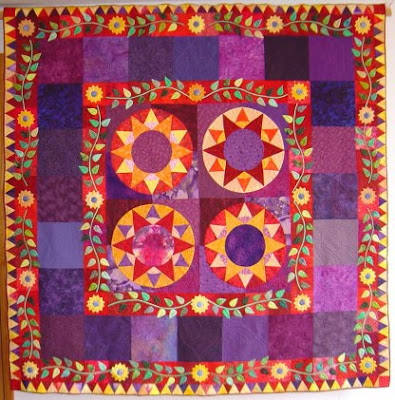 This quilt is missing. Lost or "misplaced" by a major carrier on its way back from Colorado. You can visit: http://lostquilt.com/index.php/2011/status/missing/kaaterskill/ for more information.

Janet is a regular reader of the blog, so feel free to leave messages for her in the comments section. She will be able to read all of them.

Janet, my heart goes out to you. Let's all hope and pray for a speedy return of this fabulous quilt. Contact info for Janet is on the Lost Quilt site in case you have information about the quilt to share.

Rant #1: On a local TV station they are advertising a "Tripple Feature". When did triple gain another "p"?!?! And it's in all caps on the ad!

Rant #3: Books and magazines with more spelling and grammatical errors than should be possible in this day and age. Has everyone stopped actually reading documents and books for errors or are they depending solely on spell check? Has the job description changed for editors and for proofreaders?

Rant #4: Facebook. Did you know that you cannot delete your account once you have one activated? Yes, yes...they will let you "deactivate" your account after telling you why you shouldn't--I believe there are 8-10 reasons you can choose from and each time you click one of them it gives you a song and dance about why you shouldn't deactivate for THAT reason. Apparently the information is still visible--just not active. It's very unfortunate that there is no "guest" membership so that you can check things out, opt out if you want and delete your info. I'm sorry--that's just wrong in my book. (I know there are many of you who love Facebook--I'm sharing my opinion. Remember me? Read the masthead to refresh your memory if you don't.) Oh, and ditto for Twitter.

Rant #5: Will this winter never end? The doors to my shed (which is where my snowblower is stored) were iced shut and no amount of banging with a hammer would free them. So...I had to shovel the entire drive for the second time this winter. And we got at least 16 inches. I did see several robins today--but I think they were sent ahead to toy with our minds. They are probably starlings with robin coats on.

I have been hand quilting like a maniac and prepping for upcoming classes. That's why I've been so silent here. Hopefully pictures next time. Happy Thursday...hopefully I have started it out with a chuckle. 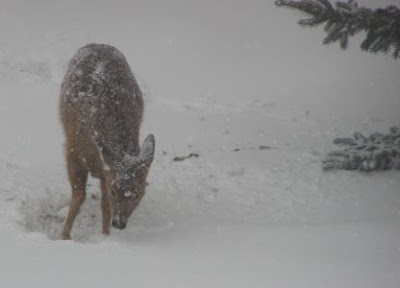 I guess we should be glad that we are not living outside 24/7. Two of the six horses are shedding big time--I'm talking handfuls at a time. So spring must be coming...but she keeps taking a detour!
For those of you who are winners, remember I need your snail mail address. If you would prefer not to claim the prize, please just send me a quick email so I won't keep hounding you. (I don't want anyone to go "unprized"!) I am putting the finishing touches on the patterns this week--I'll let you know when they go into the mail.
Last night and today I spent washing fabrics and cutting six good-sized tree quilts. A good job done.
The third finish is about two hours away from the hand quilting being completed. I tried something different for the design and am pleased with how it is looking. Pics when it's officially on the "finished" list.
Guess that does it for this time. Happy start to your week. May it bring at least a bit of stitching every day.
Hugs,
Sharon
P.S. I'm listening to Worth Dying For by Lee Child; excellent!
Posted by Sharon Stroud at 11:32:00 PM No comments: 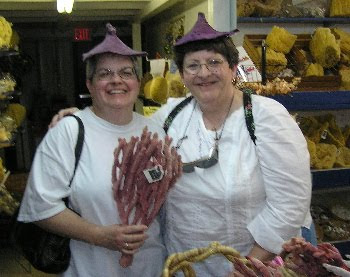 No one has more fun than we do! We are wearing sponge hats (they weren't intended as hats, but...), and I am carrying a sponge bouquet. The good news? We are self-entertaining and basically harmless. The bad news? We live several states apart, but do make the most of the time we can spend together.

Enjoy your day, my friend!