No stockings hung by the fire--we have baseboard heat and I wear pantyhose--and it's raining at the moment--but Christmas spirits reign supreme! I so enjoy the last-minute wrapping (alright, the making too, obviously!) and I just found my favorite Christmas CD: The Spirit of Christmas by Amy Grant. It was a Hallmark CD from 2001. Full orchestral sound, a little Vince Gill thrown in for good measure--always gets me in the mood.

I'm going to take a chance and show you a few of the gifts I made for this year--I don't think anyone who is getting them will read this before receiving them. If you guess who they are, please keep quiet!!!!

Quilting Arts Gifts had a great idea for luggage tags. One of my friends has several (!) Featherweights and has named them all, so I made her a different luggage tag for each and did custom cards with pretty script with their names. They were easy to make (don't tell her!) and I think she will really like them. 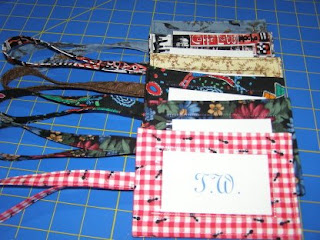 I have a friend who collects ladybugs so I made her this delightful pincushion! The pattern is by Hatched and Patched from Australia. And, yes, I can embroider--I just try not to make a habit of it! The whole thing is only about five inches! The company also has patterns for several other pincushions that are equally as cute. 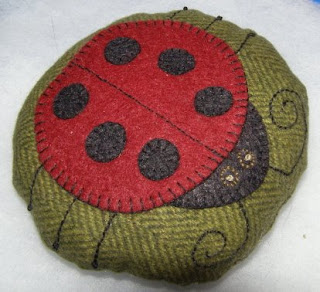 Last year I got back into knitting because of a ladybug dishcloth for this same friend. This is a new design that I found on the internet for this year. I love the seed stitch border--it lies nice and flat. 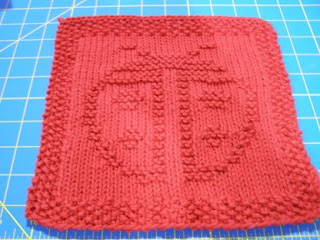 At 9:30 tonight I finished a pair of wool socks for my mom. Just in the knick of time! I actually made the second sock in just a few hours with a very concerted effort. Now I have just a hat and wrist warmers to make but I have a couple days to do those. I know I've said it before, but I still can't believe that I am knitting socks!
Here's a fresh off the digital camera picture of Lynnie. 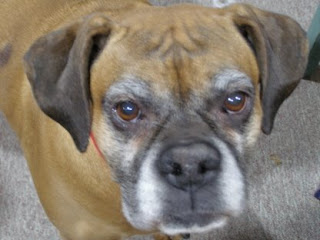 She was trying to help wrap presents (actually she was trying to see why Callie could get up and help but she had to stay grounded). This is what was going on above her eye level: 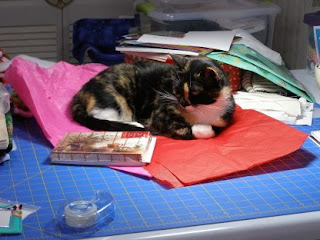 I'll just say that it takes a lot longer to wrap presents with a cat helping! LOL!
Merry Christmas, everyone! I hope your holidays are full of fun, traditions, great gifts and lots of laughter. God bless us, every one.

Email ThisBlogThis!Share to TwitterShare to FacebookShare to Pinterest
Labels: callie and lynnie, gifts

BRRR!!!! No matter where you are, let it be known that it is very cold in Central New York! The windchill is below zero and the winds are high. And we've had several days of snow with more to come. So...I've spent the day making presents! It seemed so good to just spend the day sewing--and it was a mostly machine work day, with a bit of hand sewing thrown in. Contrary to what some people believe, I actually started out machine piecing--but always with hand quilting! My goal as a teacher is to keep the hand skills alive, but machine skills are also important. And to that end, I am teaching several machine piecing classes after the first of the year. I will update my website soon with those listings for those of you who are interested.

I did finish Scarpetta--thrilling from beginning to end. I was, however, a bit disappointed in A Quilter's Kitchen--it really is mostly a recipe book with short stories thrown in between the sections. The good news for this time of year--it only took about an hour to read; the bad news is that it left me wanting more from this book. My opinion only--it should in no way be construed as the view of any other reader.

Just like very other holiday season, it seems that it comes too fast, requires lots of last minute frantic activity and is over before I blink. A few years ago Jen, owner of Pucky Huddle Delight, and I decided that having a Christmas Club would be a great idea. We would start in January and "bank" our finished projects so that we would have all our Christmas gifts done by October. We did ornaments, placemats, and some other fun stuff. The only problem was that half the class moved away and the club ended in April! And, sad to say, my stuff was in exactly the same state as when I finished the classes--in other words--absolutely nothing finished! The best laid plans of quilters everywhere!

Happy Hanukkah to those starting their celebration on Monday! And to all...a good night!
Posted by Sharon Stroud at 11:39:00 PM 2 comments:

Have you ever had a quilt top that was difficult to mark? You would either need to use two or more different markers and wonder if they will come out after the quilting is done. Well, here's something to consider. If you know the top will be difficult to mark and you have not bought your backing yet, how about buying either a back that is light enough to mark on with a silver Prismacolor Verithin pencil or dark enough to use a white Verithin pencil? You would do your outline quilting (if there is any) or any quilting in the ditch to mark blocks if you would like to do that; this is done from the right side. Now turn the entire piece over and mark your other quilting designs on the backing! You can easily see the markings and can quilt smoothly and without straining to see the lines. If you mark lightly enough, the marks should have worn off while you were quilting.

And, if you are marking an all-over design, you can just start marking and quilting! What could be easier?

In these pictures you can see the outline quilting (done in yellow, so all you really see is the shadow) and then the spiral done in a variegated thread. 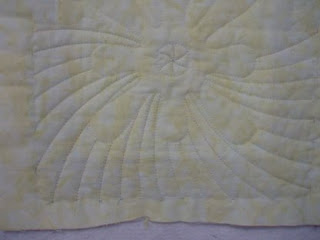 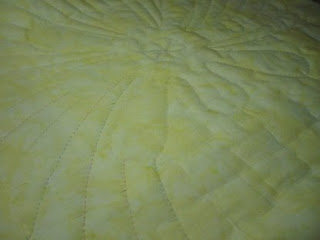 And here is the final result. I took the picture at an angle so that you can really see the dimension that the quilting adds. I still need to bind the piece, but I quilted it in about a day. 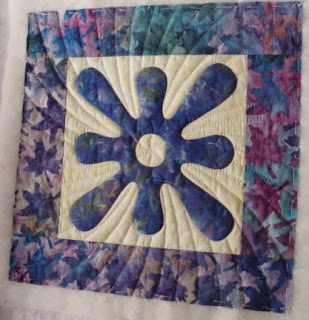 Next post: Who knows? I've been doing a bit of everything the last few days. I just got Scarpetta by Patricia Cornwell--unfortunately in hard copy, not audio, so I can only do one thing at a time with that! And it sucks you in at the first chapter. Other authors I have been listening to are David Baldacci, Lee Child, Dick Francis, Anne Rivers Siddons, Clive Cussler, J.D. Robb, Stuart Wood...all excellent to keep me listening and working!
May the spirit of Christmas abide in your hearts all year long. Til next time....
Posted by Sharon Stroud at 1:04:00 AM 4 comments:

that I would need parental controls on my computer to keep Callie from posting to the blog!!!! But we both loved the comments--many thanks to all who did leave them! Callie is sitting on my cutting counter, which is behind where my computer sits, so that she can supervise this post. Probably so that she can be sure I don't say anything too bad about her!

I've been busy getting ready for the holidays. I'll be teaching up til December 18, with the 2009 schedule set. I'll post that on my website soon for those who are interested. I have been quilting--finished another small piece last week and started another. I think I have about five ready for binding. I've also been working on some ornaments and a bit of holiday knitting.

Here are some pics of the wildlife outside my sewing room window. Enjoy! 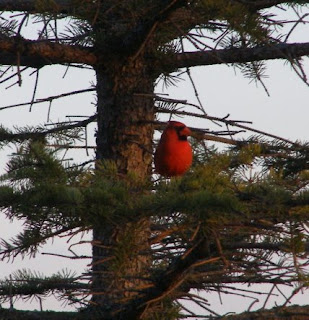 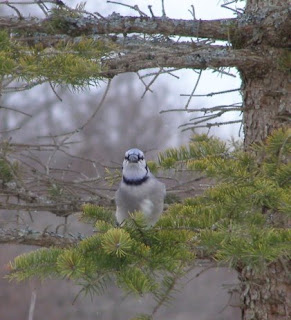 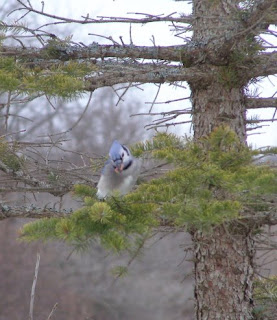 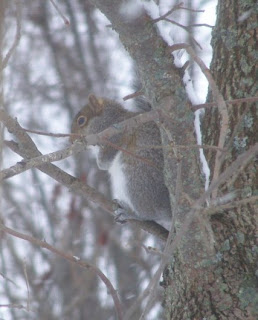 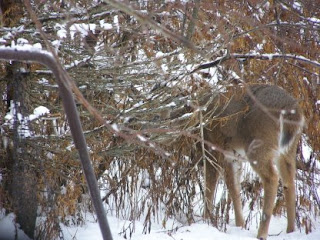 Email ThisBlogThis!Share to TwitterShare to FacebookShare to Pinterest
Labels: wildlife 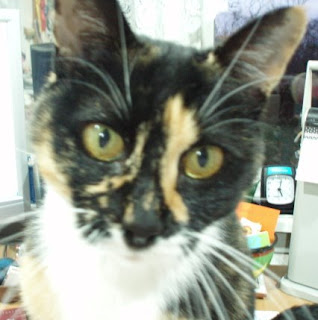 Hi, everyone. My name is Callie. My mom told me she has been posting more frequently (for her!) and no one is commenting. She is wondering if anyone is out there reading her stuff and looking at her pictures.

Life is good here at Stroud Quilting Central--except my mom talks to herself quite a bit--should I be worried? Nah, she always has a good supply of dog and cat food and treats and a HUGE supply of catnip. And at least she won't be known as the "Cat Lady" because of that dog in our life. So I guess she'd have to be the "Cat and Dog Lady" or maybe just "Crazy" would fit the bill.

Well, all this typing has made me tired, so I am going to have a hit of catnip and take a nap. Don't forget to write...as you can see, I will be checking!