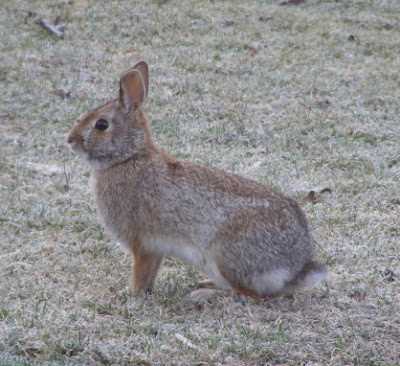 Our Easter bunny looked like this!  I'm not sure where he was hiding the eggs ;-) 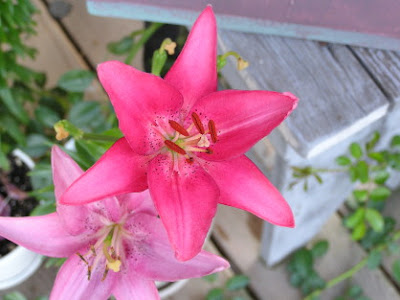 Easter lilies?  Not quite, but as close as I could get.

I hope you all had a wonderful day with family and friends.

Someone said they were ready for more horse pictures!  (I know not all of you will be thrilled, but it has been awhile.) 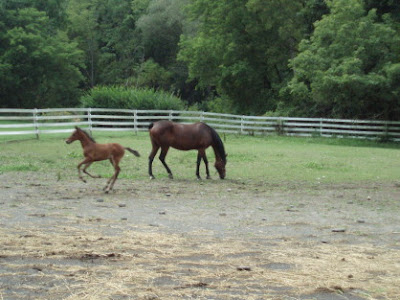 March 2010.  He loves to carry a bucket in his mouth.  He will swing it, toss it, butt it with his head, chase it, jump on it.  He's self-entertaining. 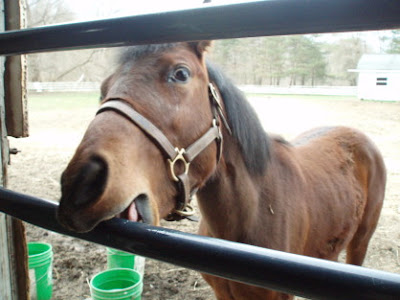 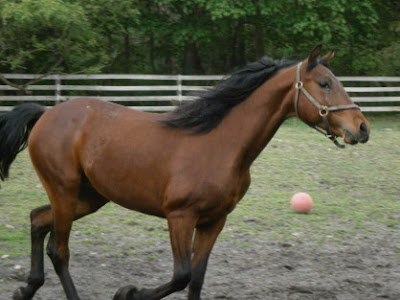 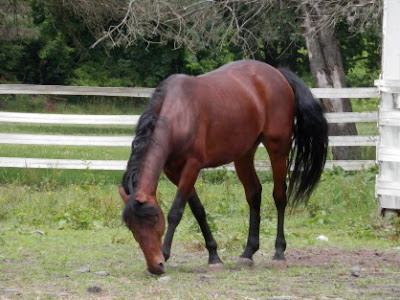 So there's the horse fix for the moment.  Thank you, Terri, for asking.

P.S.  I am listening to Suspect by Robert Crais, and just finished Calculated in Death by J.D. Robb.
Posted by Sharon Stroud at 11:21:00 PM 3 comments:

Take Time to Smell the Flowers

Many of you have commented on the picture of Lynnie smelling the flowers.  As I was looking through pictures of her tonight, I found several more.  Enjoy! 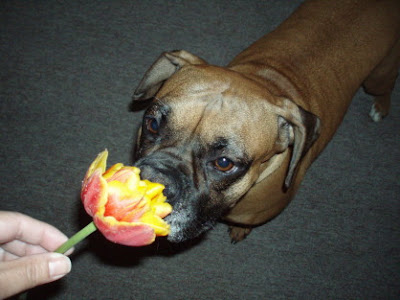 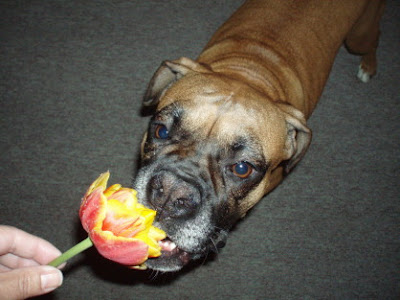 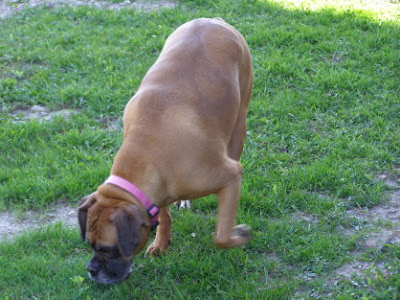 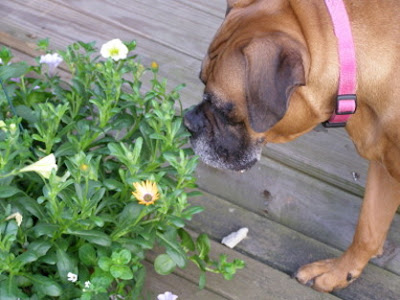 At first glance, don't these look like golf clubs?  Perhaps a putter and a chipper?  (As you may be able to tell, I am not a golfer, but these don't look like irons...that's the extent of my golf knowledge!) 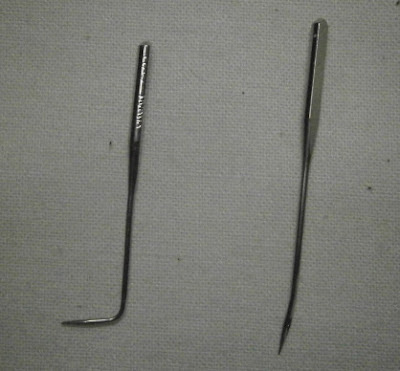 These are really sorely misused machine needles!  EEEK!  The name of the perp has been withheld to protect the guilty, but it is not the same perp as before.  I'm not sure if that's good news or bad....

Winter is back with us--that horrible wintery mix of snow, freezing rain, more snow, more freezing rain....  We are all tired of it.  And tomorrow is the first day of spring.

I've been washing and pressing fabric today and I have a small wallhanging almost quilted. And I've been trying yet again to find the top of my cutting island.  Dickens has taken a liking to laying sprawled in the middle of it.  Between him and all the stuff I've laid on it, I don't see much blue of my cutting surface.

Gotta run for now.  Oh...try not to make any golf clubs out of your machine needles.  Just sayin'.

P.S.  Sorry, Laurie--two years didn't seem all that long in the grand scheme of unfinished items. Good for you that it was only a year!  Bet Bruce loves it!
Posted by Sharon Stroud at 11:24:00 PM No comments:

A Student Finish and Good News

Good things come to those who keep at a project...I think it's called "Finishing"!  Laurie finished this cutwork applique piece (my design) for her husband for Valentine's Day.  (The back story is that it was for Valentine's Day 2011, I think!)  She wouldn't let him take it to work to hang in his office until I had seen it; it should be proudly displayed by now.  Hand appliqued, hand quilted, binding and label--great job, Laurie! 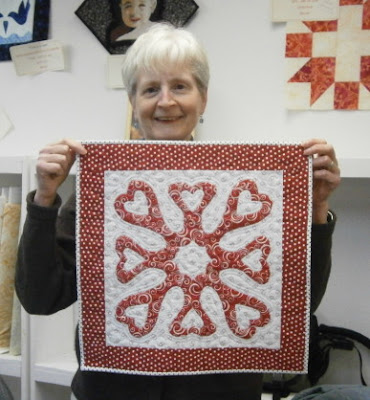 Yet again you have let me win.  Sharon Stanley had another contest on her blog www.sharonstanleywrites.blogspot.com a bit ago.  All you had to do was leave a comment by noon on a certain date.  I commented to get things started...and I was once again the only person to comment.  So I now have a one year subscription to FOLK magazine.  You can check out the details on Sharon's blog and then go buy your own magazines on the newsstands!  It's delightful!

That's it for tonight.  I've been reminded that I am not blogging frequently enough, and I am sorry about that. I'll try to do better.  Wait til you see the next post...stay tuned!

P.S.  I am listening to The Fifth Assassin by Brad Meltzer.  Excellent.
Posted by Sharon Stroud at 11:19:00 PM 1 comment:

ahhhh, honey, honey!  A blast from the past to be sure, but this line of Tonga Batiks is just as sweet as can be.  The line is Timeless Treasures Sugar.  Feast your eyes: 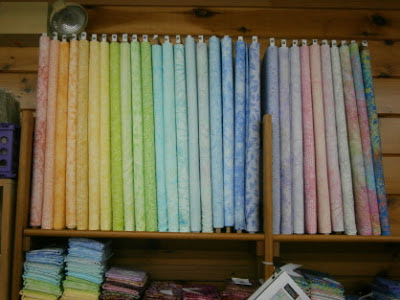 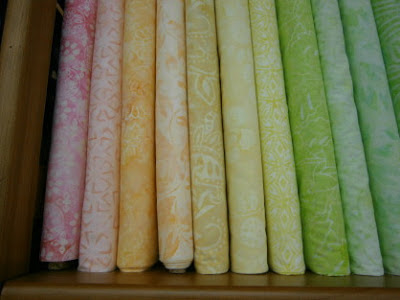 Close-ups of the colors and patterns. 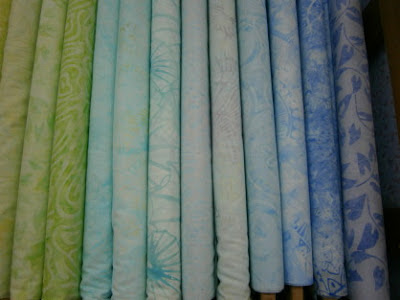 Look at the vines on the last bolt to the right above. 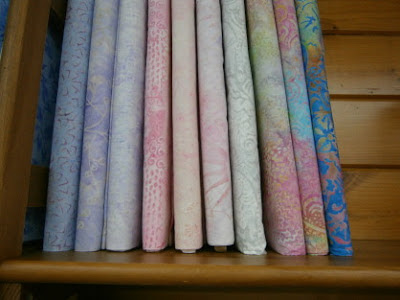 There's even a soft gray.  And check out the multi-colored bolts--great for borders! 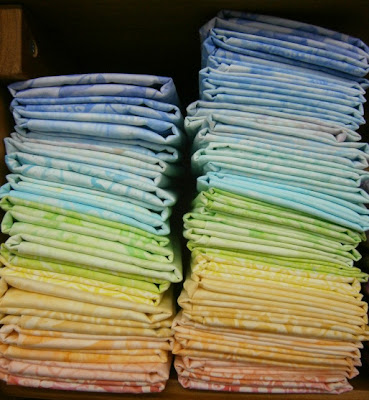 Fat quarters and halves waiting for eager hands to touch them. 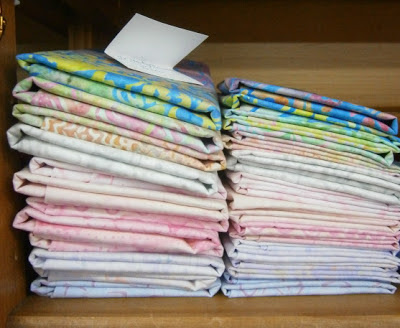 And the best part?  You can have them now!  Pucky Huddle Delight in Candor, NY, is the first quilt shop on at least the east coast to have these lovelies!  Don't live near Candor?  No problem!  Email julievk@puckyhuddledelight.com and they can be delivered directly to your door.  Julie says she can get about 5 yards worth of fabric in the smallest flat rate mailer.

A note from me:  PLEASE do not email asking for some of the third fabric from the right on the second picture.  These fabrics will have been moved more times than we can count by the time this even reaches you.  The best thing to do?  Visit www.ttfabrics.com and search for Sugar.  There you will find all these fabrics with their color numbers.  Easy peasy.  And while you are there, be sure to download the free pattern made especially for all 30 Sugar fabrics.

Did this sound kind of like a commercial?  I guess probably, but, geez, who else would enable you to get your hands on these so soon!  I've personally touched them all.  So come on in, this fabric is fine!

Blissful hugs to all,
Sharon

At 5:30 tonight, Lynnie suffered a massive heart attack and is no longer with us.  She did not suffer, for which I will be eternally grateful.  I cannot imagine life without her.  But I have wonderful images of her running free 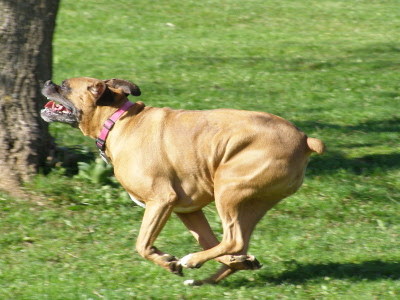 and taking time to smell the flowers.  Heaven is richer by far tonight.  See you at the Rainbow Bridge, Lynnie.  I love you always. 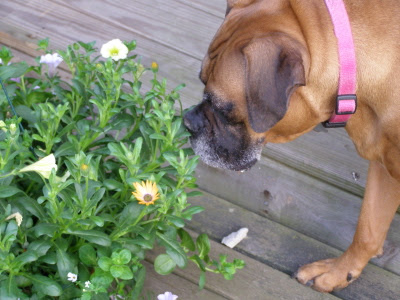