For those of you have been anxiously awaiting a picture of my newest project, the wait is over! Here it is! And the big news, you ask? Well, I am hosting a handwork retreat at Wiawaka Holiday House in Lake George, New York, from August 12 to 16. And this is what we will be making, as well as learning to hand quilt my way! (That's no poked fingers and no hoop or frame for those of you who don't know!) More information is available on my website http://www.sharonstroud.com/ - look under Retreat. Beginners are welcome. 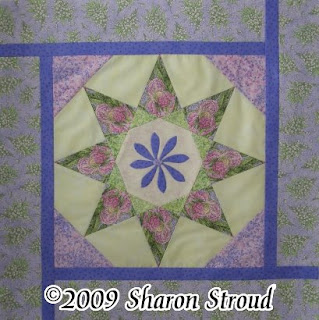 More good news: Remember I told you about trying to connect my new TV and VCR/DVD? Well it took me a couple days, but I finally got it. And about two days later I figured out how to actually record! (Let's face it...it was mostly trial and error but I am nothing if not obsessive when something doesn't work.)
We are all so lucky in so many ways. There are (and will continue to be) days when it seems nothing goes right and we chant "nobody loves us, everybody hates us, guess we'll go eat worms". But let's be thankful every day that we wake up (always a good start to the day), have enough food to eat, a warm place to live and clothing to cover us. Let's face it...everything else is just gravy. Say it with me: Thank you, God, for every blessing!
And thank you, readers, for sticking with me. I know I am spastic about posting, but sometimes I feel like a one-armed paper hanger--so many things to do and only one of me. But I always enjoy hearing from you--so don't be shy, leave me a comment once in a while.
Til next time!
Sharon

Email ThisBlogThis!Share to TwitterShare to FacebookShare to Pinterest
Labels: retreats

In other words--hi, howdy, w'as up--you get the idea! This will be a short post to let you know I am alive, to be followed in a couple days with pictures and more stories.

Have you ever thought about how some words and phrases sound really cool? Like "colored pencils", "paperclips", "newspaper clipping". I found the name Calpurnia in a book recently. Or Declan Fitzgerald (from a Nora Roberts' novel). One of my favorite yarns is Dream in Color "Smooshy".

I recently heard (again) that children laugh over 200 times per day, but adults only laugh about 4 times per day. Come on, fellow carbon-based units, we need to yuk it up more! And I mean lots! It's good for our health, our sanity (or what we have left of it), and it just makes us feel good. I don't mean those little smirks--I mean belly laughs that make you gasp for air and grab your aching sides. Make people wonder what's so funny--but don't necessarily tell them--that makes you laugh even harder! (Okay, that's a bit mean, but it could be so, so much worse!)

After I left the post about Patrick Swayze (still hubba hubba!), mkmouse said we should have classes and play Dirty Dancing during them--a mighty fine idea if there is no rotary cutting going on and if students don't mind paying the class fee to see a movie! It is, after all, (did I already say this?) PATRICK SWAYZE!! ;-)

If you are looking for a good movie that husbands/significant others would also like, try Black Dog. It's a double hubba for me--Patrick Swayze AND Randy Travis! And Randy sings and both guys look great from any angle! There are big rig chases and lots of action to keep the guys interested. Me, I love the movie, because my husband used to drive tractor trailer and I used to go with him. Takes me back a few years. Okay, it's not a chick flick per se, but... (okay, I won't say it again...but you know what I'm thinking!).

Nights in Rodanthe just came out on DVD last week--one of the few movies I've actually seen at the theatre. I cried in all the same places, but much louder since only Lynnie and Callie were here to hear me. I did try to muffle my sobs in the theatre.

Okay, one more blah, blah and then it's good night (or actually, good morning). With the switch to DTv and its technical aspects, I finally broke down and bought a new flat screen TV. The old one was made (and bought new) in 1990. Most of the push buttons had fallen off years ago and we used a pencil or screwdriver to change channels. The new one even has a remote! I also invested in a VCR/DVD recorder--I'm still trying to attach that to the TV and make it work. At the moment, new TV is attached to old VCR. I think I am missing an S-video cable to complete the package. Or perhaps not. I will enter the digital age--but without much grace or wisdom!

OK...enough of this falderal and fiddlededee. Did you remember to do something nice for someone today? And for yourself? Did you randomly smile at someone just because you could? Go ahead...make someone's day! (Clint would be proud!)

Email ThisBlogThis!Share to TwitterShare to FacebookShare to Pinterest
Labels: movies

What'd I tell you? I tell you what I told you! I told you to change your needle after every 8 hours of sewing, or at least every new project. Does anyone listen? Well, at least one person didn't!

For those of you who are squeamish, you may want to turn away. What you are about to see is not pretty. 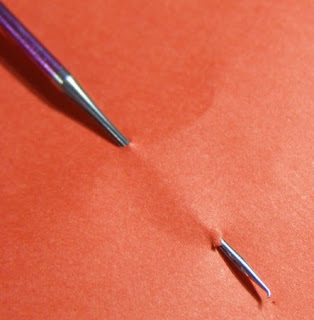 Exhibit B: A close-up of the tip of the needle, in case you couldn't see that massive hook in the tip in the photo above. (Check out the shadow--it's a dead give-away!) 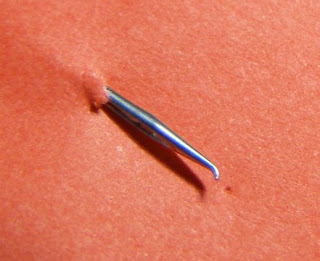 When questioned, the perp admitted to changing the needle--but refused to specify a date. After multiple lashings with a wet noodle, she finally admitted to changing the needle in November! NOVEMBER 2008! The incident in question took place on February 4, 2009. We know for a fact that the perp has made at least 7 quilted items in the past week alone! After ascertaining the problem, I was forced to smell the M&M tin to keep from fainting! The poor machine was pulling to the left at each stitch and making a horrible thumping noise--a clear indication of extreme distress for the Featherweight. With a new needle and lots of gentle encouragement (and knowing that her mother was going to get it big time), she resumed her normal purr and stopped trying to veer left.
So remember--you should not be using a crochet hook as a needle! Don't make me come over there!
This public service announcement has been sponsored by sewing machines everywhere who ask that you treat them to a new needle frequently. And that does NOT mean just when they break! They shiver at the mention of the lady who traded in her 25 year old machine and proudly said, "I've never changed the needle!"
Til next time!
Hugs,
Sharon

Okay, I think my heart rate is almost back to normal. But, I mean, really...Patrick Swayze!!!

And, as usual, I have to go to the Blog-fessional and admit that it has been (gasp!) 11 days since my last post. Sorry--life has happened. While tonight's blog is short, I promise some good stuff coming in the next day or so. A "What the..." and some new pics and....

Keep good thoughts in your hearts. Til next time!