Another First and a New Adventure All Rolled Into One

The subtitle for this post could be "Yet another thing that was never meant to be on my bucket list but that can now be crossed off".  Continue reading at your own risk; this is a true story.

Okay, I'm beginning to see a pattern and I think the common denominator is me.  It always starts out so innocently.  Take Friday afternoon, for example.

Remember the end of January when I was on jury duty?  And we convicted the defendant on two serious charges?  Well, Friday was the sentencing.  Yes, I had served on other juries before where there was a conviction and I did not go to the sentencing.  But there was something about this recent case that has kept me in turmoil.  No question the guy was guilty.  I can only guess that it might be because of the trauma suffered by so many innocent people, with no remorse from the defendant, and having spent nine days immersed in testimony and deliberations.  I guess I wanted to see this through to the very end.

So Friday afternoon, I took myself to the courthouse, went through security and up to the hallway outside the courtroom.  Standing there minding my own business among quite a large group of people.  One of the defendant's lawyers saw me and came to an abrupt halt.  I thought she was going to say something, but she quickly moved on and I didn't think anything more about it.  Until everyone left the area where I was standing!  I moved to a different part of the corridor, away from the top of the stairs, and there was much whispering and moving away.  Moses and the parting of the Red Sea came to mind!  (No disrespect intended.)  The courtroom doors finally opened and "the others" went in.  I asked the bailiff if I was the only juror to come to a sentencing hearing and he said "Yes."  Apparently no other juror in the history of at least this court has ever shown up after his/her stint on the jury was over.  Until Friday.

I won't bore you with all the details, but statements were read from both sides to help the judge determine the appropriate sentence.  One of the defense lawyers hinted that the jury was not smart enough to realize his client was not guilty (this is my interpretation of what was said, but I was trying to close my mouth and not jump over the railing).  The defendant showed no remorse for his actions, only kept saying that he was such a great guy.  I still think, even at sentencing, that he figured he was going to get off with no jail.  Imagine his and his family's surprise when his bail was revoked and he was taken immediately from the courtroom to jail.  There was a lot of shouting, angry words, bailiffs congregated to keep peace.  Talk about tense.  The good news?  At least he didn't get just the minimum sentence, he has a long period of supervision upon his release from jail, and he must always register as a sex offender.

I wish I could say I feel better about this.  But I think of the two women whose lives have been changed forever by someone else's stupidity.  Lives can literally be changed in the blink of an eye.  I hope you will join me in trying to make those changes positive.  Even just a smile can give someone hope and encouragement.

Thank you for listening.  I usually try not to post about things that are too serious, because I want people to come here for a laugh--or even a good guffaw--at my expense.  And now you can see that I am the common denominator in so many weird things--both on and off my bucket list!
Posted by Sharon Stroud at 11:42:00 PM 4 comments:

Email ThisBlogThis!Share to TwitterShare to FacebookShare to Pinterest
Labels: thanks for listening

It's All in the Flap

Many years ago, Piece O'Cake Designs invented the overlay system for applique.  It involves 12 gauge upholstery vinyl and eliminates the need to trace the applique pattern onto the background fabric.  Yea!  Thanks, Becky and Linda!

But sometimes patterns do not come with an entire block layout, which means it is difficult (if not impossible) to make an overlay for placement.  So here's what I do.

I have long been a fan of Country Threads' designs.  Last year, I acquired this pattern and wanted to make it. 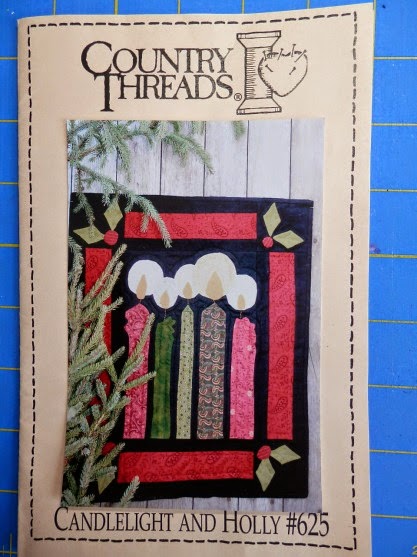 Pattern pieces only.  Luckily, I had worked on a much larger piece several years ago so I knew the drill!

After cutting out the appropriate fabrics for each piece, I started laying them in their designated spots according to the pattern front.  Once you get them arranged "just right", you don't want to have to remove them and applique just a few at a time--because the next additions will be slightly different than you originally had. 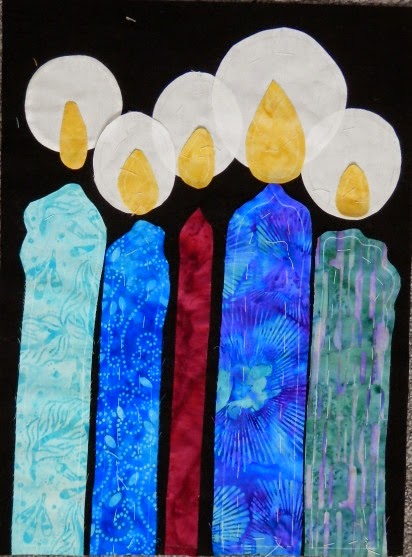 The candles themselves were not a problem, as they did not cross each other.  The "halos" and flames were a different story.  After arranging them, I pinned them in place (the pins are gone in these pictures).  Notice where the circles overlap?  That's where the flap comes in. 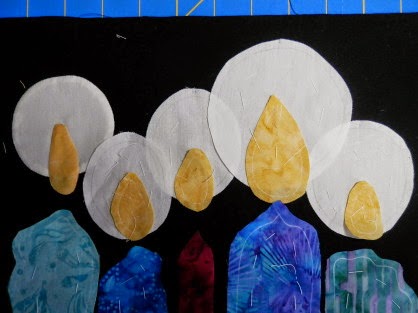 You can see in this pic that I basted so that I did not catch the layers underneath.  Now all my applique pieces are basted in place and this becomes a portable project, with no pieces to get lost! 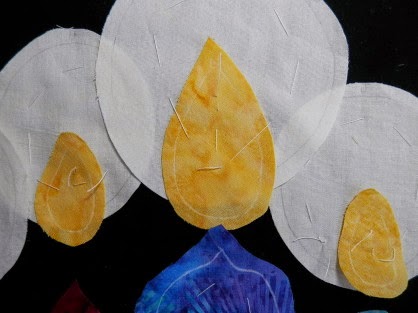 Here you can see that the circle and flame on the left have been appliqued.  The next piece to be appliqued is the circle on candle #3.  The flap on circle #2 has been pinned back. 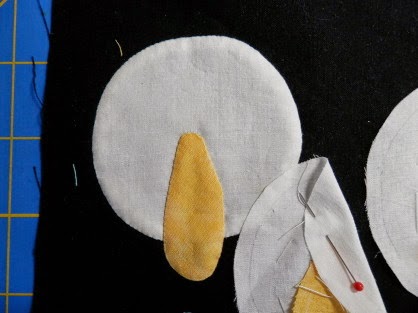 And the flap on circle #4 is also pinned back.  Notice that the bottom of the flame on circle #3 is pinned up to allow full access to the circle!  The circle will be appliqued all the way around, the flame unpinned and appliqued next.  See the plan?  Too cool right?
At this point I can applique circle/flame #2, or I can do circle/flame #5, then finish with #2 and #4.  We always applique the pieces farthest away from us first. 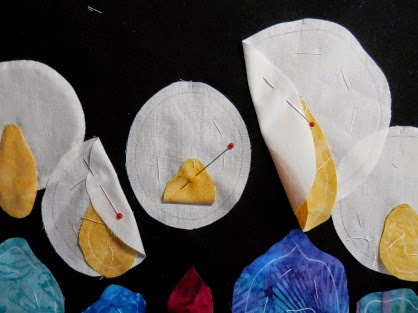 Because I had used batiks for all but the background, the look was a bit more stained glass than country.  So I eliminated the applique on the corners and opted for a bit different finish. 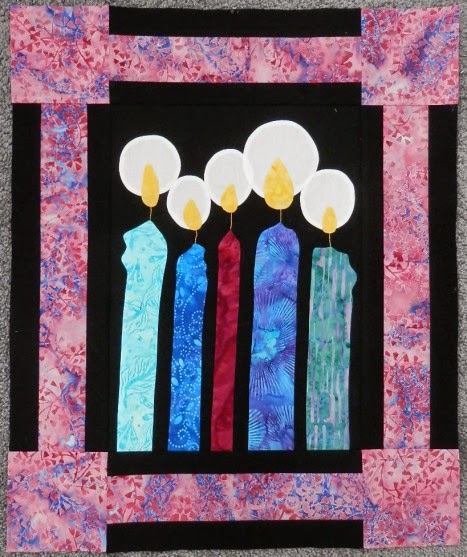 For those of you who are designing things as you go, this is a fabulous technique, as you can keep adding things, as long as you remember to leave flaps for easy sewing access.

So that's what all the flap is about!

P.S.  We had another inch or two of snow today.  And while I was sitting in the parlor this afternoon, two deer came up to the window!
Posted by Sharon Stroud at 9:46:00 PM No comments:

A Bit of Catching Up

Last Saturday, five women joined me for another skill-builder class at Patchwork Plus in Marcellus.  We worked on the Handy Andy block, with lots of points and quarter- and half-square triangles.  These points are so sharp you could cut yourself on them!  From left to right:  Susan M., Sharon N., Gale, Alice, Pat A.  Great job, ladies!  It was a great day! 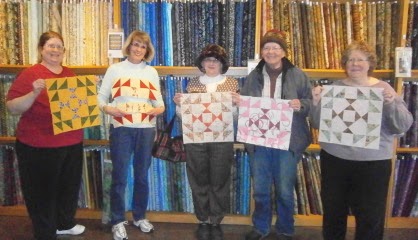 The Thursday before that Judy D. brought in her completely finished Monthly Bliss 3 quilt.  It is so beautiful.  Blocks were hand pieced, and the top was set by machine.  Truly lovely! 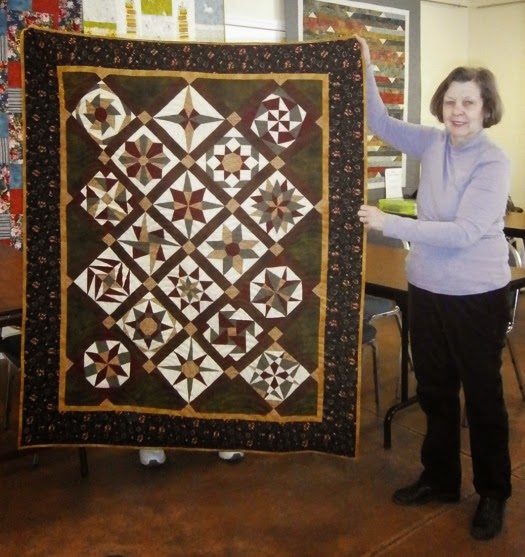 For those in the Featherweight class on Sunday (and for anyone having a Featherweight), there is a great book showing how to use the attachments on this and several other machines.  It is The Sewing Machine Attachment Handbook by Charlene Phillips.  People are often asking me if I use the attachments, and honestly I don't!  I go backwards and forwards very happily!  The pictures in this book are first-rate and you will be able to use those attachments.

I have not forgotten the applique tip.  Just needed to get a bit of this stuff out there first.

P.S.  I have listened to Private Vegas by James Patterson, Flesh and Blood by Patricia Cornwell, Deadline by John Sandford.  And I have read (in the last two weeks) Crossfire by Dick and Felix Francis, The Blood of an Englishman by M.C. Beaton, and Night Ride Home by Barbara Esstman.

And...for those of you that I've told about the horses at St. Mark's--I've ordered the book, so be prepared!

With a Little Help From My Friend

A week or so ago, I was laying out my 32 point Mariner's Compass, trying to get the big pies arranged just right.  I turned away for a second, and .... 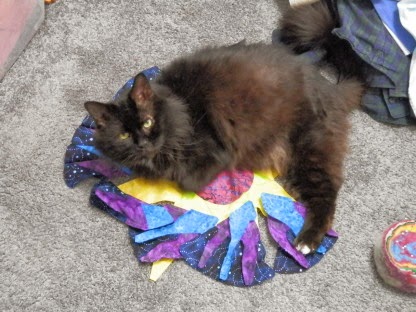 You will  notice how nicely Dickens folds under his front paws, the better not to claw the material!  Those scowling eyes mean he's in it to win it.  I would have thought the pins would have been a deterrent, but I guess not! 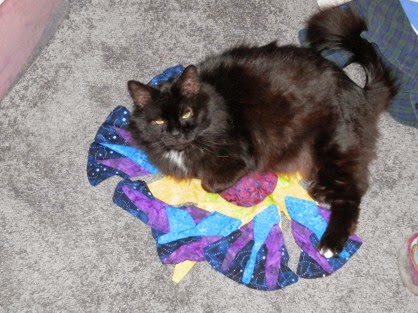 What's a quilt without a bit of cat hair?

If anyone reading this has emailed me in the last week and not received an answer, please try again.  I had trouble receiving email, but I think it is fixed now.  Talk about scary!

I've been working on a new hand piecing sample, and I put binding on a small wallhanging today.  I haven't been letting the grass grow under my feet!  (In rereading this, I had to laugh--we still have FEET of snow on the ground, much less grass!)

Hope you are all well and enjoying the tropical heatwave we are having.  I have a really cool applique tip to share in the next post--stay tuned!

Those of you who know me know that I love Mettler thread, in all its weights.  I can say that I "used" to have all the colors in 40, 50 and 60 weight.  But now, I only have about half of the available colors of 60 wt.!  How is that possible, you ask?

A couple weeks ago, the new fixtures came in for all the Mettler thread weights.  Talk about Nirvana!  Because the color of thread for applique is so critical, imagine my delight to be confronted with more than 200 spools of 60 wt. applique thread!  Swoon!  I'm making a list of those colors I have and those that I need--that's right, you heard me--need! Jealous?  You needn't be.  You too can partake of this bounty!  If you are not within driving distance, visit puckyhuddledelight.com to learn more and to order your must-have colors.  They carry the full line of 40, 50, and 60 weight threads, as well as the 50 wt. variegated.  It's the only shop I know of in my area that carries the full line of Mettler threads.

Color, glorious color!  At least they make me think of spring, unlike the weather outside!

P.S.  I am listening to The Witness by Nora Roberts and reading True Betrayals, also by Nora Roberts.  Both excellent.
Posted by Sharon Stroud at 8:40:00 PM 5 comments: