If any of you are in the Shelburne, VT, area on Sunday, October 31, please take time to visit the Champlain Valley Quilters' Guild's show. It is being held at the Coach Barn on Shelburne Farms. The quilts are fabulous, and the building they are being shown in is spectacular.

Both the show and the farm are worth seeing--it's a trip you won't regret. For more information, go to www.cvqgvt.org and click on the 2010 show tab on the top.

Saturday morning I was up at 0 dark thirty to drive to Scranton, PA. The day was spent in the company of 13 fabulous women who wanted to learn how to quilt my way. All I can say is WOW! They all worked hard--some had never quilted before and some had quilted with the rocking method (but were not satisfied with that method). By the end of the day, all were making stitches that were great on the front and the back and were justifiably proud.

Doesn't everyone look so serious? 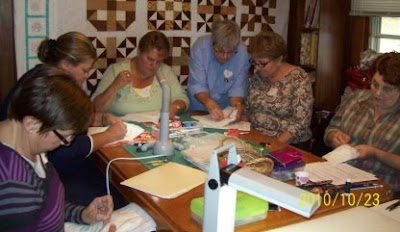 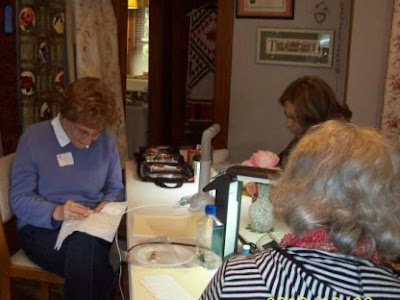 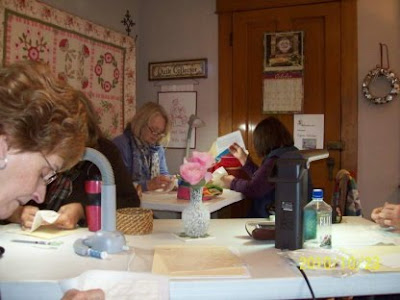 At the end of the day--happy smiles all around. Thank you, ladies, for a wonderful day. You made me very proud. Special thanks to Maria for hosting this quilt fest and for the pictures. (And the trip home was uneventful!) 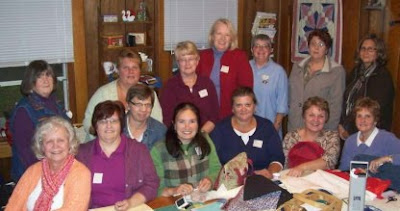 Where in the world is Sharon Stroud, you ask? You just never know!

P.S. Many thanks for the supportive comments on the last post. They meant a lot.
Posted by Sharon Stroud at 11:54:00 PM 4 comments:

Comments made on each posting are forwarded to my email so I don't have to search for new comments--which I did before I figured this out! Imagine trying to remember how many comments had been made and figuring if more had been added! Mind-boggling, shall we say.

I look forward to comments--it means a lot when someone takes the time to respond to what I've had to say. And I don't mind if people disagree with me--if it does not take a right turn toward mean.

Imagine my surprise tonight when reading my new comments. Especially to my "Lucky Girl" post. I have deleted the offensive text, which was left anonymously. It was rude and mean-spirited. I sincerely hope that I got it off before any of you saw it. It makes me angry that someone would use my blog as a vehicle to strike out at someone. And shame on them for doing so anonymously.

On a much happier note, please check out Janet's comment on "Here Today". Janet, your words made my heart sing--thank you. And heartfelt thanks to all who comment in the spirit of friendship and lightheartedness that I try to bring to the blog. You are appreciated--each and every one of you. (I especially pointed out Janet's comment because I read it just before the "other" one. From high to low with a mouse click.)

Next post--back to our regularly scheduled good cheer.

How many hours (days, months, years) do you get into a project and decide it is just not right? I had been knitting on this scarf (an excellent pattern, very beautiful) for quite some time, but only a little actual knitting at a time. Why, you ask? Because it had several rows of patterning that had to be counted very carefully. One of my main "rules" for knitting is that it has to be simple enough to knit anywhere. I was actually trying the pattern in the scarf size to determine if I wanted to knit the shawl. (The yarn is Ella Rae lace merino in color 102.) 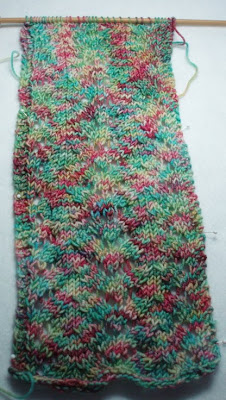 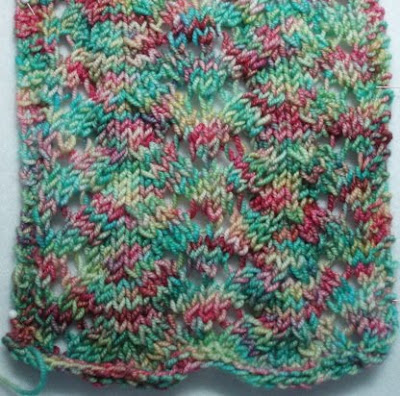 And this is what it looked like on Thursday afternoon. I knew I would never finish it, so while Callie wasn't looking, I frogged it. And cast on for a new scarf. I actually cast on twice. Once with too many stitches, thinking it would look fabulous wider. Then, after knitting several rows I realized my mistake and cast on again. 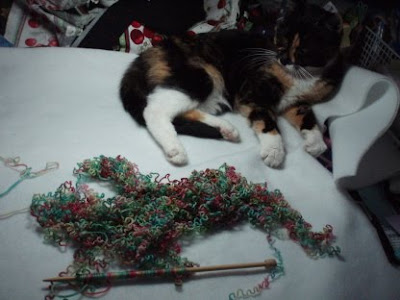 This is the result of only a bit of knitting. It is the feather and fan pattern, with three knit stitches on each side, 8 rows on the top and bottom to keep it from curling. Only four pattern rows total. (For the feather and fan pattern, please visit: www.allfreecrafts.com/knitting/feather.shtml. You can knit lots of things in this pattern with different needle sizes and weights of yarn! 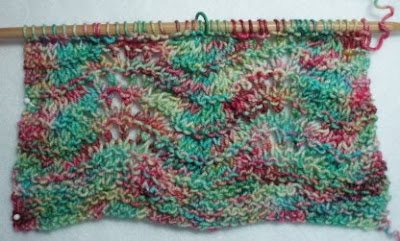 A close-up of the pattern and yarn. 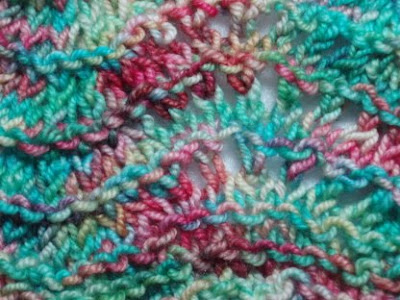 In an ironic twist of fate, I was catching up on some blog reading today and guess what I found? The Yarn Harlot (http://www.theyarnharlot.ca/blog/) is using the same stitch pattern and the same number of stitches to also knit--wait for it--a scarf!!! How cool is that!
I have been quilting as well and will share those pics over the next few days. I actually started and finished something in less than 24 hours! (Okay, haven't I warned you about keeping chocolate by your computer in case you are overcome with vapors at what I'm up to? Consider this your second warning.)
It's been beautiful here the last couple days--but windy and cool. Better than snow! And the furnace is fixed--Yahooooooooo!!!!
Hugs to all,
Sharon
Posted by Sharon Stroud at 11:47:00 PM 3 comments:

Email ThisBlogThis!Share to TwitterShare to FacebookShare to Pinterest
Labels: knitting

Guess Who Came to Dinner

Between classes Thursday night I was wandering the aisles at O'Susannah's when the door opened. I glanced up and did a double-take!!!! Who should be standing there, but my friend and cohort-in-crime Anita Shackelford!!! I had known that she was teaching about an hour away, but a rendezvous didn't seem possible while she was in the area. The story unfolded: One of my students for the night class had been at dinner with Anita on Wednesday night and asked if she knew me! From there, the student gave Anita directions to the quilt shop and told her where I would probably be eating if I had left the shop. The rest, as they say, is history. We went to dinner and talked and laughed and hit the highlights of the past year. (Yes, it has been almost a year since we saw each other!) Then Sue gave Anita the tour of the Upstairs Inn while I started class. Anita stayed for a bit of the class which was a treat for my students. Since we are almost always at odds over how best to do something, the students had a chance to hear us debating the merits of our chosen method! I hope they enjoyed the exchange as much as I did.

After Anita left, class was over, and I was driving home, I realized that I should have had someone take our picture. Since that ship had long sailed, I did the next best thing--I found pictures of us from a few years ago at our retreat. She will tell you that the tiara and wands were MY idea, but she very carefully leaves out the story of the "enhanced" wands and the fact that she wanded me and the largest jewel in my tiara fell out! I mean, really! She says I am her touch of insanity. I'm taking that in the best possible light. Here we are: 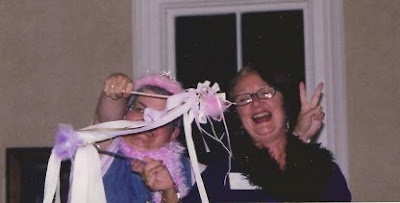 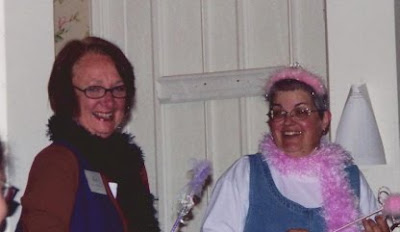 It must have been about 9 billion degrees that August, but we persevered with our boas and good humor. So good to see you, Anita! Thanks for literally going the extra mile to get together!

On the home front, I have been without heat for the better part of a week. Waiting for a part for the furnace. And then, to add insult to injury, the power went out this morning--apparently only at my house--and didn't get fixed until 8 pm. I still consider myself lucky--it could be the middle of winter and no heat, and I could have been trying to prep for a Sunday class with no electricity. Lynnie, Callie, and I don't think we will ever be consistently warm again. It's a sad state of affairs to have to go outside and stand so that when you come back in it seems warmer!

Okay, that catches us up. I can't tell you how much I enjoyed seeing Anita. And without electricity I wouldn't have been able to tell you about it! Lucky girl, indeed.

Big hugs to everyone!
Sharon
Posted by Sharon Stroud at 9:50:00 PM 3 comments:

On Tuesday night I arrived at class to find a surprise package! Inside was this beautiful cobalt jar with lid and two spools of Valdani quilting thread! 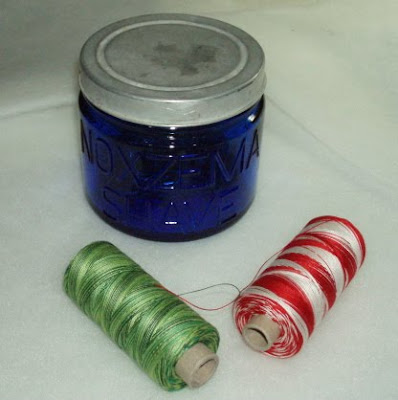 The jar says Noxema Shave on it and the lid lifts off. Inside are a ton of straight pins--not, I'm sure, the original contents! LOL (Talk about a prickly shave!) 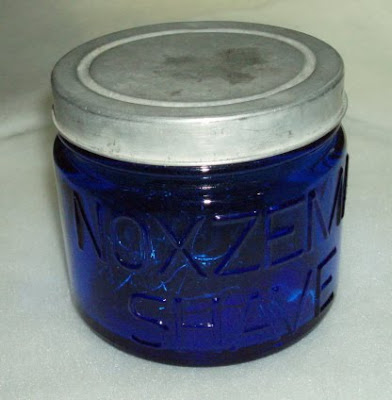 These delights were from my friend Jay--who read the post I did about my cobalt glass fetish and decided I would love this jar. And I do! The thread should need no explanation!

Tomorrow I'll tell you who came to dinner!

Remember the cobalt stuff I got a few weeks ago? I thought you might like to see it displayed. This is the windowsill over my kitchen sink. I took out a few green and crystal pieces to make room for the cobalt and the bird. It's fun to have pretty things to look at while in the kitchen. 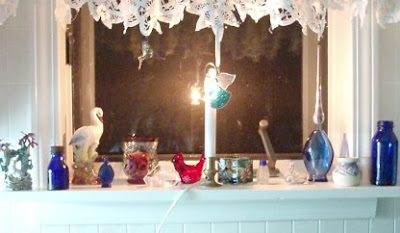 I'm reading The Drunkard's Path by Clare O'Donohue and just finished listening to Eight Days to Live by Iris Johansen and I, Alex Cross by James Patterson. Both were excellent.

Off to the land of Nod. See you on the other side.

October 1. Hard to believe...where has the time gone? For me, it's been spent quilting and horsing around! Can't get better than that!

As I was touring the gardens the other day, I found these beautiful roses. They are small and not especially fragrant, but they are hardy and bloom right up until frost. 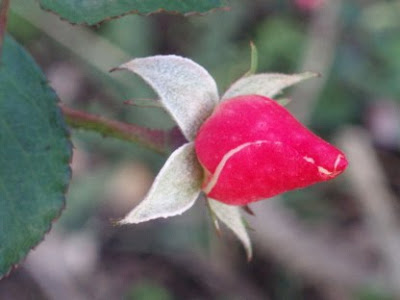 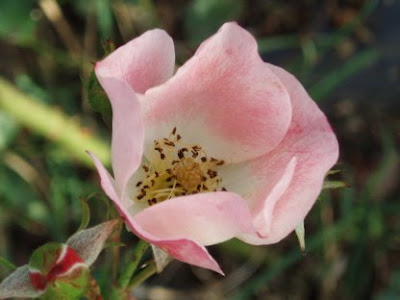 I cut the silver lace vines down every year and they come back better than ever the next year. This year has been no exception. My dad and brother built an arbor over the parlor window and it is completely covered with vines. When you sit in the parlor, the light is very filtered and the vines crisscross for a jungly look from the inside. Birds even nest in it! Here are some close-up shots of the blossoms. 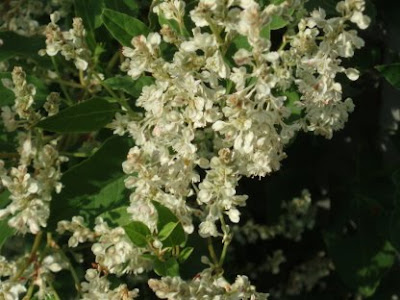 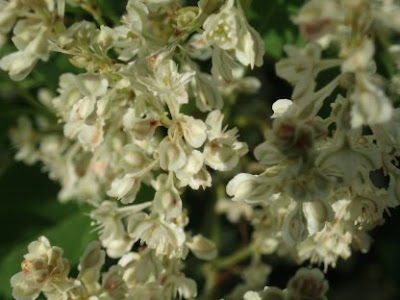 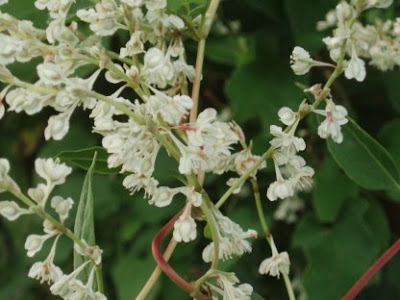 We got over 4 inches of rain yesterday. I was, of course, on the road to do a lecture. Poured all the way there, unloading, reloading and all the way back. But we were very lucky not to have the flooding that the south had.
Leaves are turning colors fast and the geese are flocking. Sure signs of fall. Although yesterday, with all the rain, there were as many frogs and toads in the road as there usually are in the spring! Who's confused?????
Hugs,
Sharon
Posted by Sharon Stroud at 11:59:00 PM No comments: